He added that Soleimani's school was the school of rejecting dependence on Eastern and Western powers and standing up to the US hegemony. 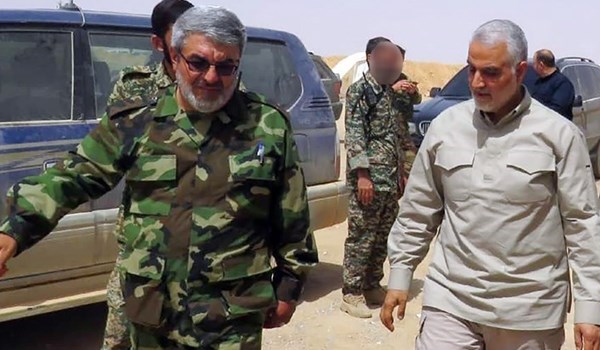 Noei-Aqdam went on to say that the path of Martyr Soleimani is the path of dignity and honor.

In relevant remarks last week, Iranian President Hassan Rouhani said Martyr Lieutenant General Qassem Soleimani was a hero for the Iranian nation and all freedom-seeking people in the world, adding that he was a source of pride for the entire Islamic Ummah.

“General Soleimani was not only a national hero, but also the source of pride for all regional countries and the whole Muslim Ummah,” Rouhani said on Wednesday.

Rouhani stressed that US President Donald Trump and Secretary of State Mike Pompeo are on top of the list of perpetrators of the heinous terror attack, saying, “They did not want the ISIL terrorism to end like this.”

“ISIL was a mercenary of the Zionists and the Americans. When they were hit, the Israelis gave them weapons wherever they needed,” he noted.

"No one benefits from the insecurity of Yemen, Syria, Iraq, Lebanon and Afghanistan except the Zionists,” the president stressed.

Rouhani said the enemies tried to eliminate the number one anti-terror commander, but they immortalized him in history.

Addressing the perpetrators of the assassination, he said, “You cut off the arms of our commander, we will cut off your feet from the region.”

Lieutenant General Qassem Soleimani was assassinated in a US drone strike on Baghdad International Airport in Iraq on January 3, 2020.

The airstrike also martyred Deputy Commander of Iraq's Popular Mobilization Forces (PMF) Abu Mahdi al-Muhandis. The two were martyred in an American airstrike that targeted their vehicle on the road to the airport.

On January 8, the IRGC Aerospace Force started heavy ballistic missile attacks on US Ein Al-Assad airbase in Southwestern Iraq near the border with Syria and a US operated airbase in Erbil in retaliation for the US assassination of General Soleimani.