According to Ashura News, quoted by the MEHRnews agency, Russia’s Permanent Representative to the Vienna-based international organizations Mikhail Ulyanov said that the current atmosphere of negotiations between Iran and the P4+1 group is 'positive'.

"To my surprise, some analysts and journalists describe the situation at the #ViennaTalks as dramatic, “almost deadlock”. This is not the case in point," wrote Ulyanov in a tweet on late Saturday.

"After the break, the negotiators returned to normal diplomatic business and maintain intensive dialogue. Atmosphere is positive," he added.

Earlier in another tweet Ulyanov announced that a coordination meeting of the JCPOA participants had been held.

"Coordination meeting of #JCPOA participants (without #Iran) was convened on Saturday evening to exchange views on the current developments in the course of #ViennaTalks," he wrote. 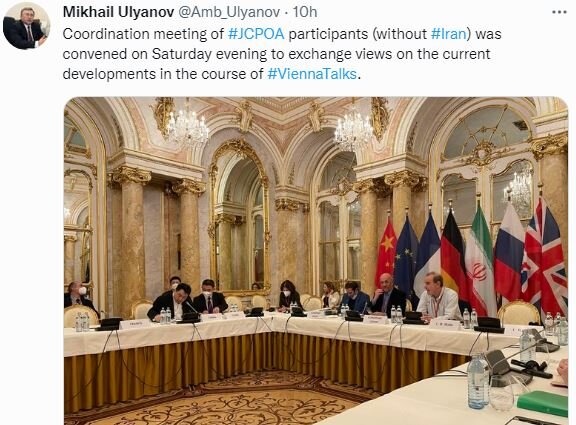 After a five-month hiatus, envoys from Iran and the P4+1 group of countries — Britain, France, Russia, and China plus Germany — began on November 29 the seventh round of talks in Vienna to resurrect the JCPOA.

At the talks, the first under President Ebrahim Raeisi, the Iranian delegation presented two detailed draft texts; One on the removal of US sanctions and the other on Iran’s return to its nuclear commitments under the JCPOA.

Iran has repeatedly asserted that the Iranian delegation is very serious in the negotiations, and the submission of documents shows the country's seriousness to reach an agreement, and now other parties must show their determination.

Iran’s top negotiator Ali Bagheri Kani said that Tehran will not accept anything less than the nuclear agreement it signed with world powers in 2015, stressing that the issue will remain Tehran’s red line at the ongoing talks in Vienna.

He said several points of difference have remained unresolved in the draft text that was the outcome of the six rounds of talks held between April and June, adding that they required decision-making at the highest levels.

The senior Iranian diplomat added that the remaining issues, which are not too many, “will form the core of serious negotiations at the level of senior negotiators of Iran and the P4+1 countries.”

He further said that some of Iran’s proposals were accepted by the opposite side while some were not.